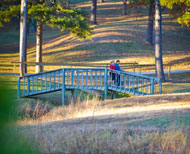 Crowley’s Ridge College at Paragould became a four-year institution in 2008 after many years of being the only two-year college in the country affiliated with the Churches of Christ. The college opened in July 1964. Its founder, Dr. Emmett Floyd Smith Jr., had a strong desire to bring college-level Christian education to northeastern Arkansas. Smith had established a Christian secondary school, Crowley’s Ridge Academy, in 1953. The groundbreaking ceremony for the new college campus was held on Jan. 29, 1964.

“When Crowley’s Ridge College began in 1964, I am certain the founders envisioned that CRC would become a special Christian educational experience where lives would be changed forever,” says CRC President Ken Hoppe.

The school is located near the crest of scenic Crowley’s Ridge on the western edge of Paragould. The 150 acres of tree-covered hills, with a lake in the center, provide a fitting environment for a Christian liberal arts education. The college has an open admissions policy and offers associate and bachelor’s degrees. CRC’s academic program is designed to integrate spiritual life, service and scholarship.

“Progress is a word often spoken around the CRC campus that speaks to the direction and perception of the institution,” Hoppe says. “The definition of progress is ‘to develop in a positive way,’ and that’s exactly what is happening at CRC.”

Enrollment has risen steadily in recent years, with constant improvements being made to campus facilities.