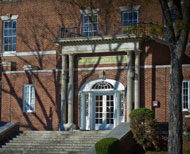 Philander Smith College at Little Rock is a historically black liberal arts institution affiliated with the United Methodist Church. It’s the only United Negro College Fund member in Arkansas. The college says its mission is to “graduate academically accomplished students, grounded as advocates for social justice, determined to change the world for the better.”

Founded in 1877, Philander Smith was the result of the first attempt west of the Mississippi River to make education available to former slaves. The forerunner of the college was Walden Seminary, named in honor of Dr. J.M. Walden, the first corresponding secretary of the Freedmen’s Aid Society. The name of Walden Seminary was changed after a $10,500 gift from the widow of Philander Smith of Oak Park, Ill., who had developed an interest in Methodist work in the South. Philander Smith College was chartered as a four-year college in March 1883 and conferred its first baccalaureate degree in 1888.