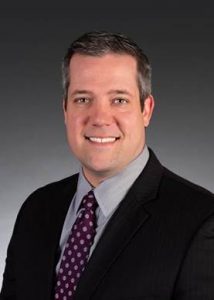 Goodman replaced Rex Horne, who had served as the AICU president since January 2015.

“Andy Goodman is not only a graduate of one of our Arkansas independent colleges, he brings extensive administrative and legislative experience to the position,” said Richard Dunsworth, president of the University of the Ozarks in Clarksville and chair of the AICU search committe. “Andy will be a strong spokesperson and staunch advocate for the value of private education. His experience with the state legislature and with public policy, as well as being a collaborative and influential leader, will enhance the contributions that Arkansas’s private colleges and universities make to a broad set of stakeholders, including the citizens of Arkansas, students and alumni of the member campuses. We are excited about the experience he brings and his commitment to Arkansas.”

Prior to his legislative aide positions, Goodman worked with the Commissioner of State Lands from 2009 to 2015, serving as the agency’s director of real estate for the final two years.

“I am honored and excited to be selected as the next president of the AICU,” Goodman said. “I would like to express my sincere appreciation to the board of directors for this opportunity. I truly believe we have a wonderful and convincing story to tell. I appreciate the diversity of our member institutions, and have confidence in the strength we create together.”

During the organization’s more than six decades of existence, more than $20 million has been raised and distributed to member institutions. In the early years, the funds distributed were unrestricted and used for a variety of purposes. Now, all money raised is used for student scholarships.