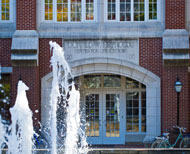 In a guidebook he wrote for students, parents and counselors about 40 U.S. colleges and universities that make a difference in the lives of students, former New York Times education editor Loren Pope said this about Hendrix: “I was unexpectedly blown away by Hendrix. It is an exemplary college, and teenagers of a wide range of abilities and interests would find this a very happy fit socially. … There should be at least one college as good as Hendrix in every state.”

Hendrix is affiliated with the United Methodist Church. The Rev. Isham Lafayette Burrow established the school, then known as Central Institute, in Altus in 1876. The name was changed five years later to Central Collegiate Institute, and the institution was purchased by the Methodist Church in 1884. The name of the school was changed to Hendrix College in June 1889 to honor Bishop Eugene Russell Hendrix of Kansas City, who had been named the presiding bishop of the Arkansas Conference. The college moved to Conway in 1890.

Hendrix is the only independent school in the state with a Phi Beta Kappa chapter.