Apptegy founder and CEO Jeston George has noticed something about liberal arts graduates: They don’t just know things. They know how to learn.

George should know. Around 10 percent of employees at his five-year-old tech startup earned undergraduate degrees at Hendrix College. 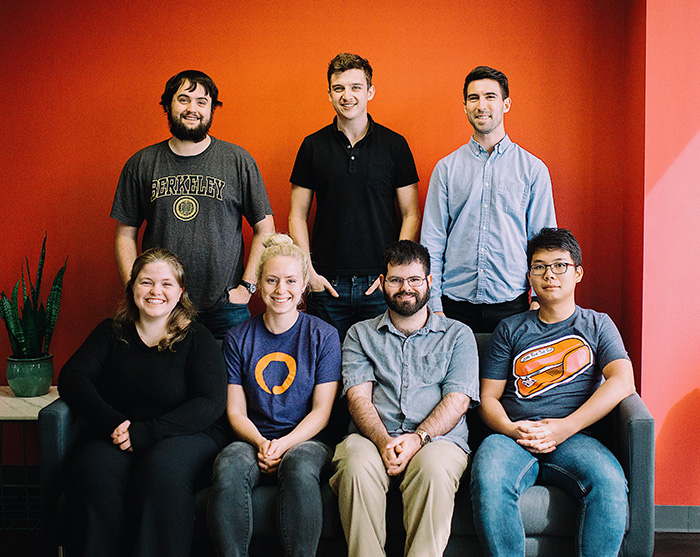 For example, David Allan ’14, who majored in philosophy, is vice president of marketing.

“When we first hired him, it was just ‘director of special projects,’ which is a made-up title,” said George. “Like a lot of people that we’re hiring from Hendrix, what he does here has nothing to do with his major.”

Apptegy works with about 700 public schools in 48 states to help them strengthen their brands through mobile apps, websites, and more.

“In a startup environment, we’re always figuring things out,” said Allan. “The ways of thinking I learned in my liberal arts education have proven very valuable here.”

Content writer Joy Spence ’18 and Kelsi Stimack ’18, a customer onboarding representative, are the most recent Hendrix alumni to join Apptegy.

Both came to Apptegy through the Arkansas Fellowship, a nonprofit project that works with Arkansas-based companies to keep new college graduates and promising business leaders in the state.

“What we want is to identify where they’re going to add value for us and align that as much with where they want to go in their careers, as well,” George says of the Arkansas Fellows’ two-year opportunities, which can lead to permanent positions.

The company’s home on the eighth floor of Little Rock’s Simmons Tower looks less like a C-suite in a high-rise office building and more like a learning lab where friends are helping public schools find new ways to connect with family, friends, and other community members.

It was George and his wife not wanting to miss their nephew’s school programs that inspired Apptegy.

“I literally asked myself, ‘Does this school not have an app?’…and thought, ‘Maybe we could do something about this.’”

George and Allan recruited politics major Barrett Goodwin ’17 after they noticed his repeated appearances on the Dean’s List.

“We didn’t really know what he was going to do, and now he’s doing data analytics for marketing content, which he’s never done before,” George said.

“It’s difficult doing what we do day after day, but I think Hendrix prepared me for that workload,” Goodwin said. “I was used to having to do a lot, at a high level and high quality, on a regular basis. [So] it’s not a problem to really dig down and come up with new ideas.”

Apptegy’s culture even echoes Hendrix a bit where the line between work and play is blurred. For example, the Apptegy marketing team recently entered the 48-Hour Film Project competition, where Spence and another team member picked up a best acting award.

“We want people to form those personal relationships, because when you have that personal trust, if your friend is screwing up, you just call them out on something,” Allan said. “People get afraid of doing that when they have these stiff, professional relationships. A lot of what we do outside of work, when we’re hanging out, it helps us build a tighter team.”

Sydney Meyer ’17 agrees. A history major at Hendrix, Meyer now works in sales at Apptegy. The company eased her transition into “the real world” in part because it has a similar sense of community to her alma mater.

Travis Howk ’17 and My Nguyen ’16 graduated from Hendrix with degrees in mathematics and computer science. They believe the experiences they gained at Hendrix with problem solving and teamwork make a big difference in their success working on the support and development teams.

“I think the really cool thing about Hendrix is that it doesn’t prepare you just to have a job, it prepares you to be a citizen,” said client success manager Greg Cameron-Cooper ’09.

Hunter Owen ’12 started his career in the non-profit sector then came to Apptegy. “Hendrix prepared me to view my day-to-day work in the context of the larger systems,” he said. 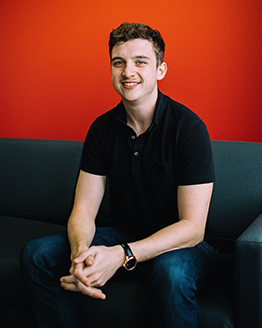 “When we talk about giving people a lot of freedom in their work and having people form an identity around their work, a lot of those ideas came from Hendrix,” said Allan, citing courses he took from philosophy professor Dr. Chris Campolo and economics professor Dr. Ralph Scott as two he appreciates the most in his daily work.

Standing near the elevator after giving a tour of the office, the philosophy major turned marketing executive stops to reflect.