The JBU men’s ultimate Frisbee team handler launches the Frisbee into the end zone for the perfect game-winning catch. From the sidelines the chant goes up: “Iron!” yells a teammate. “Fist!” the team shouts in reply. The chant repeats three times before the John Brown University’s Men’s Ultimate Frisbee Team, Ironfist, quiets again.

JBU’s Ultimate Frisbee team took their name Ironfist from the nickname the players gave the magnolia tree on the university’s Frisbee Golf course. Ironfist, the tree, when bombarded with plastic discs, smacks them straight down with the might and force of its bark said Matt Weeden, a recent JBU graduate and Ultimate Frisbee team member. “We thought that was a great representation of what we do on the field.”

Just like that imposing tree, Ironfist crushed their opponents this year in their most successful season since the club team’s start 11 years ago.

This season, Ironfist finished two tournaments undefeated, winning all 13 games against Division I Frisbee teams from Texas State University and Baylor University, as well as Division III Frisbee teams from Harding University and Colorado School of Mines. At regionals, Ironfist lost their first game but still catapulted themselves to the National Tournament by winning the next four games by at least five points.

Ironfist carried their high hopes and impressive season into the Division III National Championship Tournament May 16-17 in Rockford, Ill., where they tied for 13th place.

For Ironfist, ultimate Frisbee is not just a game; it’s a way to glorify God.

The team directs any accolades they receive for their 26-9 season to God who, they say, should receive all the praise.

“Yes, it is a club sport, but we go out every game with the main intention of showing God’s love,” said senior Aric Powers, team captain. “The game is a success if at the end of the game one person on the other team sees something different in us, and we can make an impact on them.”

Every time they play, Ironfist works hard to make honest and fair calls and prays with the opposing team after every game.

“Whether we are on the field or standing on the sidelines, we try to get to know the other teams,” Powers said. “By the end of most games we have someone we have talked to throughout the game. We’ve found this helps show that the prayer isn’t just something we feel like we should do, but is legitimate and our way of having a relationship with God.”

After every game, each team gives their opponent a spirit score on a scale of 1 to 5. For the past three years, the JBU Ultimate Team has received a 5 from all of their opponents for every game at the national tournament.

This year Ironfist received the men’s national tournament Spirit Award for best exemplifying quality judgment and positive attitudes. Ironfist won the Spirit Award at nationals in 2013 and tied with Cedarville University for the award in 2014.

While several high-impact players graduated this spring, Powers said they look forward to seeing the younger players rise to the challenge of next year’s season and continue the Ironfist tradition of playing hard, enjoying the game and honoring God. 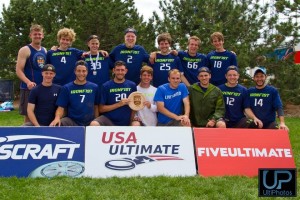