JBU’s Enactus Team placed third out of 181 teams in the Enactus U.S. National Exposition in St. Louis on Friday, April 16th after presenting their notable projects for the year and advancing through four rounds of competition to the Top 4. 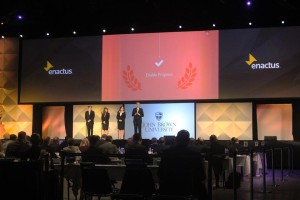 Photo Cutline: JBU Enactus Team presenters (in order left to right) Luke Powers, Diana Cascante, Gabriela Mejia Flores, and Jake Knight give their presentation in the final round of competition to 125 business executive judges on the main stage at the America’s Center in St. Louis, Mo. on April 16.