John Brown University Communication students received 18 awards from the Arkansas College Media Association (ACMA) including Newspaper of the Year for the student newspaper, The Threefold Advocate.

“Our students are extremely committed to The Threefold Advocate and Eaglebreak, putting in a lot of long hours,” said Dr. Marquita Smith, assistant professor of journalism and chair of the communications department. “It’s gratifying to see them recognized and rewarded for all they’ve accomplished this year.

JBU hosted this year’s annual conference attended by students and advisors from 11 colleges and universities across the state. 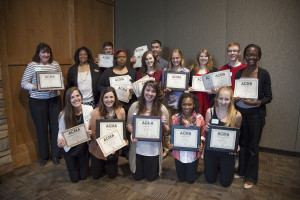