John Brown University business graduate students heard first-hand on Thursday about the future of the retail world from an Asian-based global business in a lecture given by Dow Famulak, president of direct sourcing group of Li & Fung Limited. Based in Hong Kong, Li & Fung Limited is the world’s largest supply chain orchestrator in the consumer goods market. 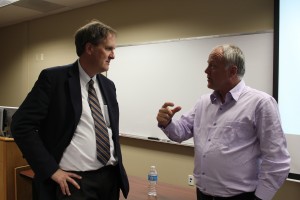 “We’re very bullish on the United States and the U.S. market,” Famulak told students. “The U.S. market has the ability to adjust. In the developing world, markets cannot adjust easily. The U.S. economy is recovering, and confidence is building.”

Li & Fung Limited Company started in 1906 and is a Hong Kong-based global organization that engages principally in export trading of consumer products as well as acting as a supply chain manager and global network orchestrator. With over 29,000 employees and a network of over 15,000 active suppliers in more than 40 economies, Li & Fung Limited is one of the world’s largest consumer goods companies.

John Brown University is a private Christian university, ranked first among Southern regional colleges by U.S. News & World Report and is listed as one of America’s Best Colleges by Forbes. JBU enrolls more than 2,100 students from 41 states and 44 countries. JBU is a member of the Council for Christian Colleges and Universities.