Gibbens Honored for 50 Years of Service at WBC

Professor Jerry Gibbens was recently honored for a very rare milestone: 50 years of service at Williams Baptist College. Gibbens was recognized during WBC’s spring graduation ceremony for completing a half-century at the institution.

While Gibbens received a medallion to commemorate his five decades at Williams, WBC President Dr. Tom Jones revealed that the commons area in the college’s Maddox Center is to be named Gibbens Atrium, beginning this fall.

Gibbens, professor of English and chair of the division of arts and sciences at Williams, is only the second employee in school history to reach the 50 year milestone.

“Jerry Gibbens has influenced thousands of students throughout his 50 years of teaching in the English Department of Williams Baptist College,” said Dr. Tom Jones, WBC president. “His faithful service has provided institutional stability through his wise academic leadership and his consistent example as a follower of Christ. Known for his quiet and kind way, the deep and abiding acts of ministry and encouragement offered by him and his wife, Barbara, continue to sustain and encourage his colleagues at Williams to this day.”

Over the summer, the Maddox Center is undergoing extensive renovations, and the newly minted Gibbens Atrium will be unveiled at the beginning of the 2017 fall semester, with a ribbon cutting ceremony date to be determined.

“I was certainly surprised when I learned the college would name the atrium of the Maddox Center for me,” noted Gibbens. “I have been blessed to work in an institution that I love. My health has been excellent, and my family has been supportive. God has been good. I look forward to teaching this fall for year 51!”

Gibbens, his wife, Barbara, and their two daughters are all graduates of Williams. He and his wife reside in Walnut Ridge. 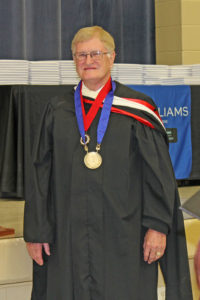