“This past year as Editor-in-Chief has been incredibly challenging, yet so rewarding,” said Redfern. “I am just so grateful for my staff and the countless hours they poured into making the student newspaper the best it could be.”

Threefold Advocate photo editor, JP Garcia, won Photographer of the Year, and the newspaper overall ranked #1 in In-depth News and #2 in Editorial Writing among other Arkansas colleges and universities.

“Jenny showed remarkable leadership this year. Her creativity and commitment to the newspaper can be seen in each edition,” said Marquita Smith, newspaper adviser. One of her most remarkable characteristics is her ability to encourage others. Her presence in the Threefold newsroom will be greatly missed.”

Individual awards were given to:

Honorable mentions were given to: 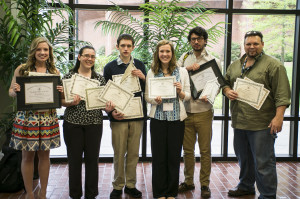